﻿﻿Marc Chandle posted the following Bloomberg chart asking: "Are Interest Rates No Longer Driving the Dollar?". He concludes that the drivers of the dollar did not change.

If we look at the data (illustrated on the following charts) we find that USD relative differentials are decreasing as all the other big economies are catching up. Europe is a good example:
- GDP is converging to US level
- CPI sharply up, thogh US maintains the relative difference
- The real yield are very close to the US. 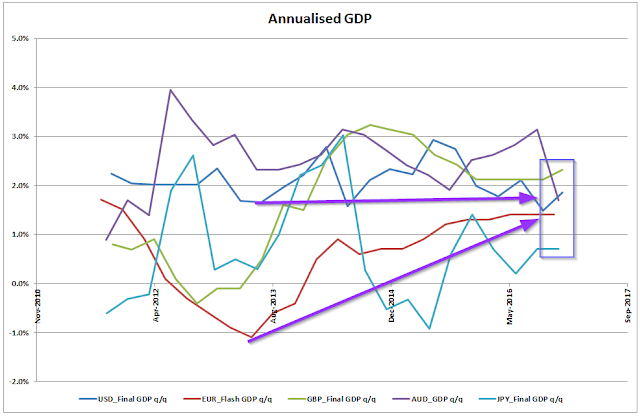 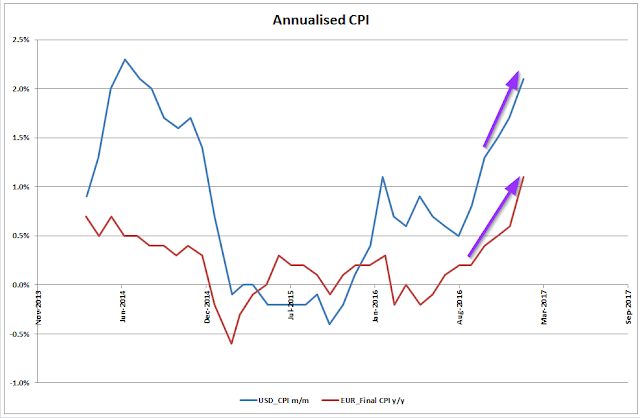 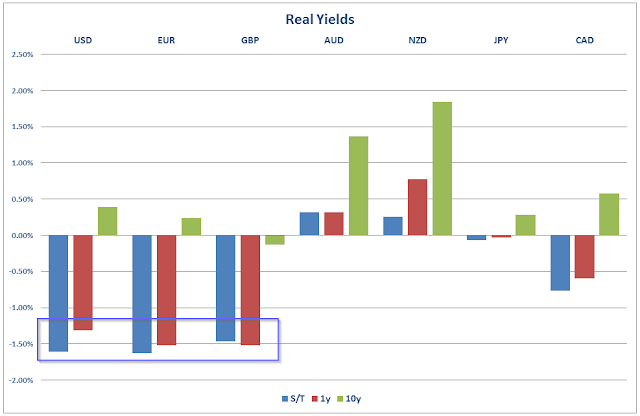 There is no doubt the that there is a big difference in the central bank rhetoric. The questions are:
- How long can the policy divergence be maintained should the data converge further?
- How Trump economics (and the world's response to it) would alter the relative differences.

It is also worth to take a look at the 10y German yield as it is trending up.

USD
The USD Index after the breakout is back to the 2 years long trading range, just bouncing back from the resistance set in early December last year. I'm long the index, but I use very tight money management as the direction is not so clear because of the fundamental.It might turn out (not for the first time) that fundamentals not always good for trading. 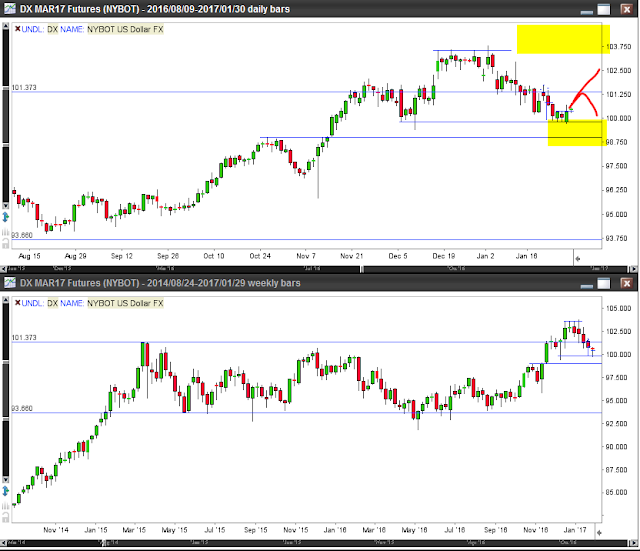 Equities
Equities still do not seem to bother anything. Buying the pullbacks is the only reasonable approach.

Email ThisBlogThis!Share to TwitterShare to FacebookShare to Pinterest
Labels: Big Picture, Week Ahead

There is a great article in the WSJ about inflation and valuation. The bottom line is:
- Reflation supports corporate earnings despite higher wages since those wages are spent,
- but it negatively impacts multiples through increase in discount rate, that can offset higher profits.
- "If it gets near 4% FED's really behind the curve" to cool down the economy that doesn't help corporate profits.

This chart illustrates the historic relationship. 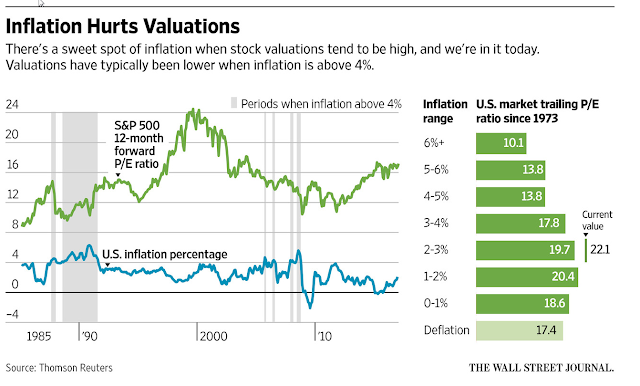 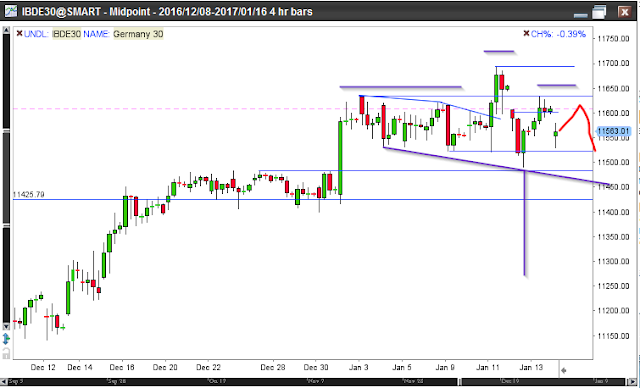 The press coverage suggests that May's message on Tuesday will be very much hard Brexid biased. This sent the cable north opening with a 140 pips gap. The next resistance is the flash crash low around 1.1500. 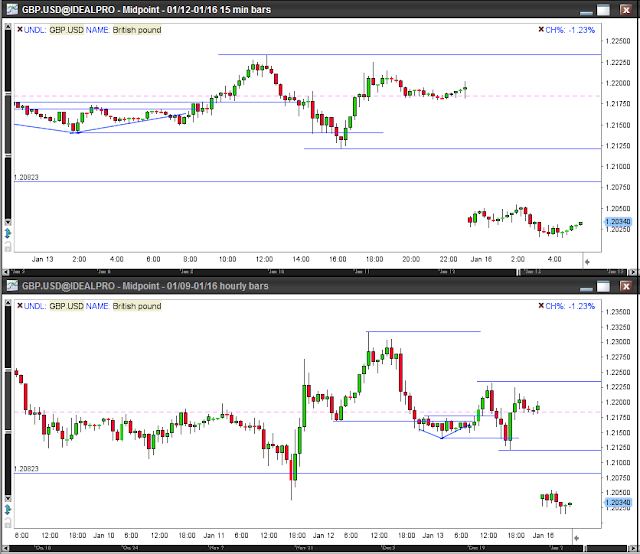 All other major peers are weaker against the USD in the range of 0.20-0.50% except from JPY which is 0.30% stronger as risk-off trade picks up.

More facts on Brexit and many CPI data release next week

There were two events last week that had meaningful impact on markets:
- Trump news conference and
- US retail sales.
Nether of them offered some clear guidance, though both of them moved the USD. Trump speech resulted in USD weakening as market expected some more facts from president elect.

Retail sales was not so impressive, though it first helped the USD. Later on the USD gave back most of the gains.

The key event next week will be May's Brexit speech in the Parliament. I suspect it would be  rather on the hard side that could lift the USD as risk aversion could prevail, but should have the biggest impact on GBP and EUR. GDP, USD and CAD CPI data will be released. Market is very much focused on the CPI figures, so especially the USD data will be important. BOC and ECB meet next week. On Friday Chinese GDP data will be released.

Equities
Equities do not seem to care about anything as they march higher. Technically the picture is mixed. There is a massive MACD divergence everywhere as the Trump rally entered into a consolidation phase.

The Nasdaq and the DAX both made some kind of breakout both with a very week follow through. I would refrain from looking any short opportunities here. Technically Nasdaq looks the strongest so I will look for long opportunities there, but scalp rather swing my trades.

AUD/USD
Aussie is at a major resistance. 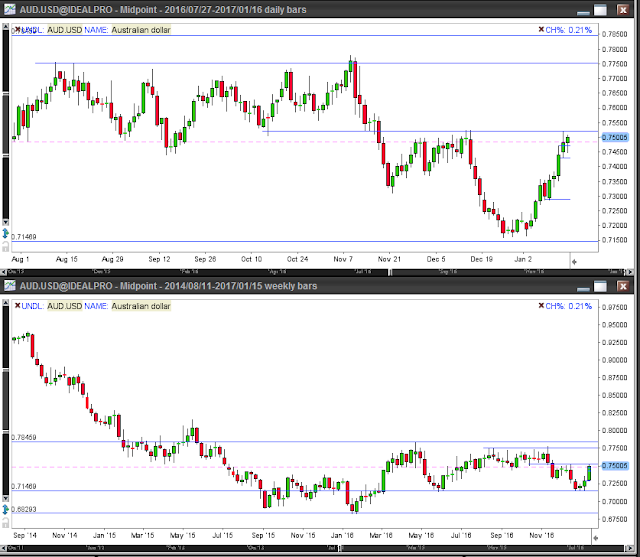 There are two forces (that are strongly interconnected) that move now the AUD:
- recovering commodity prices
- easing worries about Chinese hard lending.

The Chinese GDP is seemingly stabilizing at the 6.7% level.

USD/CAD
We are at the confluence of the long term trend line and the DEC low resistance that held so far. 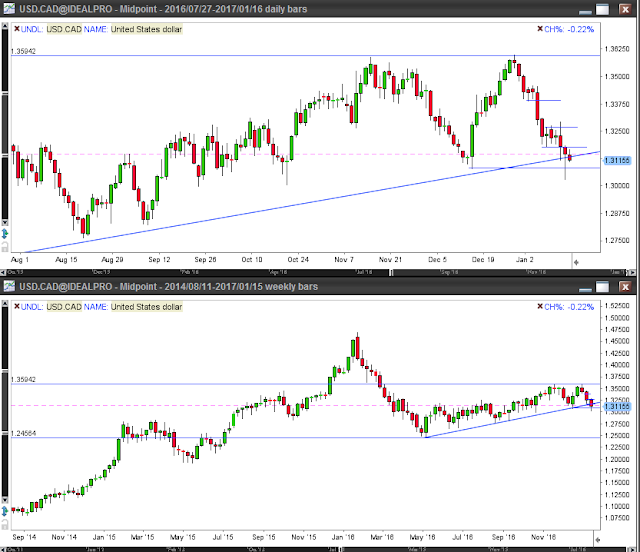 Gold
The Gold is retesting the 1,200 area which is a major resistance. 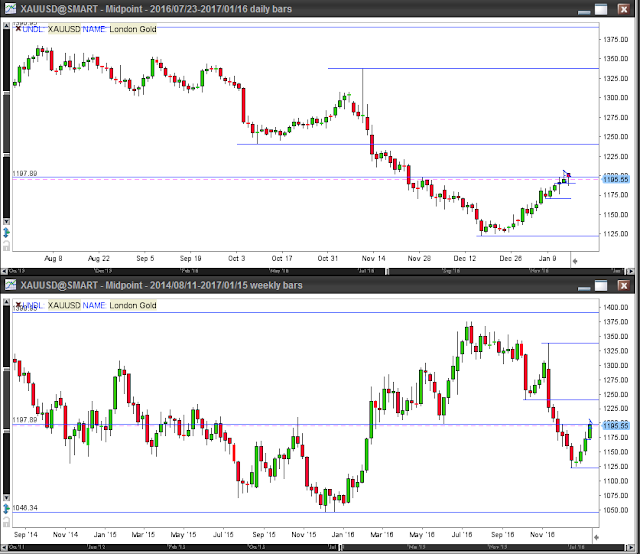 The major economic headline of last week was the stronger than expected rise in hourly earnings (2.9% yoy). This triggered a rise in US yields and fade in the USD correction as rate differentials prevailed.

The main economic fundamentals:
- The US economy seems to be expanding fast enough to create some inflationary pressure.
- Trump Administration is expected to be pro-growth (fiscal spending, deregulation, tax changes, protective policies).
- In other developed countries the inflation appears to be bottomed as economic data are improving.
- In Europe the upcoming election in Austria, the Netherlands (both on 15th March), France (7th May) and Germany pose significant risk as the populist fores are gaining strength in some countries.
- Though the data from the UK suggest that the Brexit impact was fairly muted, but we are yet to see the the post Brexit business investment activity and its potential implications. People may be somewhat too optimistic in terms of the softness of Brexit.

These all suggest that USD appreciation should continue before long. Though, we have to bear in mind, that significant USD rally could fuel fears about EM USD debt sustainability that could force FED to be less hawkish as it happened in Q' 2016. It could be less likely this time as global economic data is improving.

On the other hand the long USD trade is very crowded so it is not unlikely that the correction would have another leg.

Equities:
SP500 and US piers fade all correction and made new highs. DOW is just a few ticks from the psychological  20,000 level. For SP500 the measured move target 2,300 is the next longer term resistance. We should watch as how it can break the Trump rally high of 2,477. 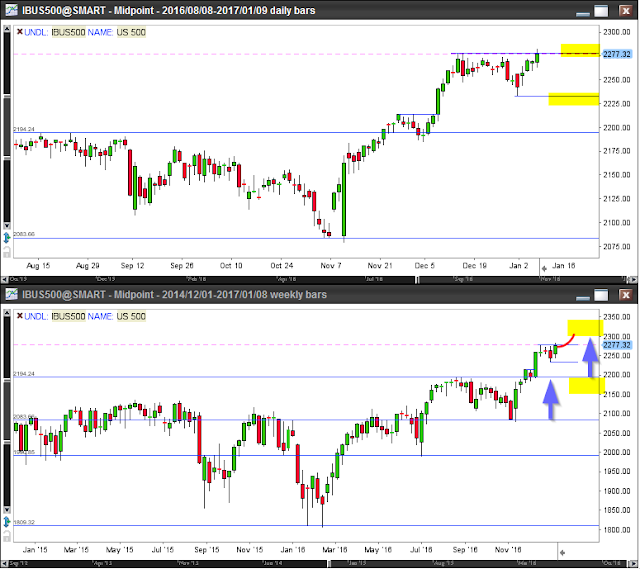 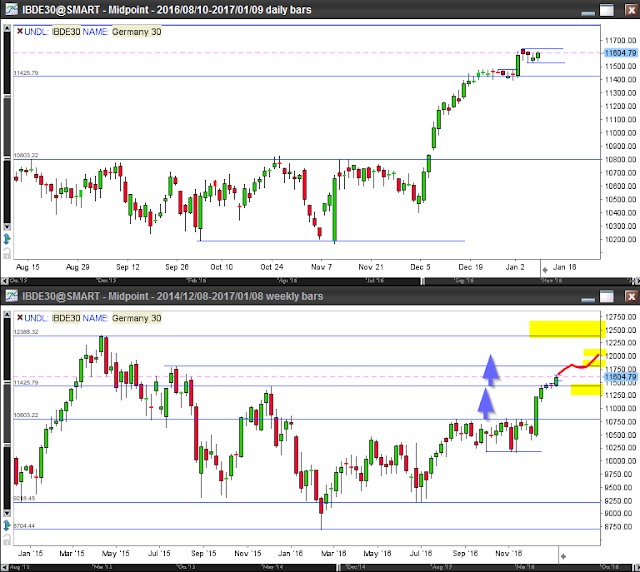 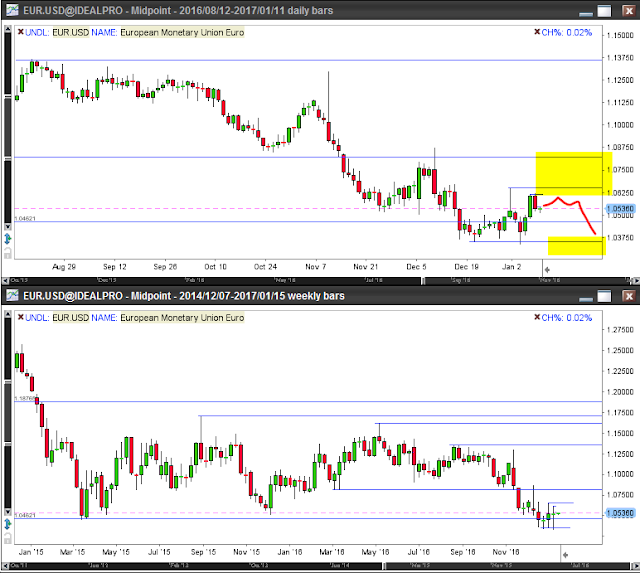 GBP/USD
The 1.2200 level broke this morning. It is a good risk reward trade to bet on the break of the 1.2100 level as it would trigger stops. 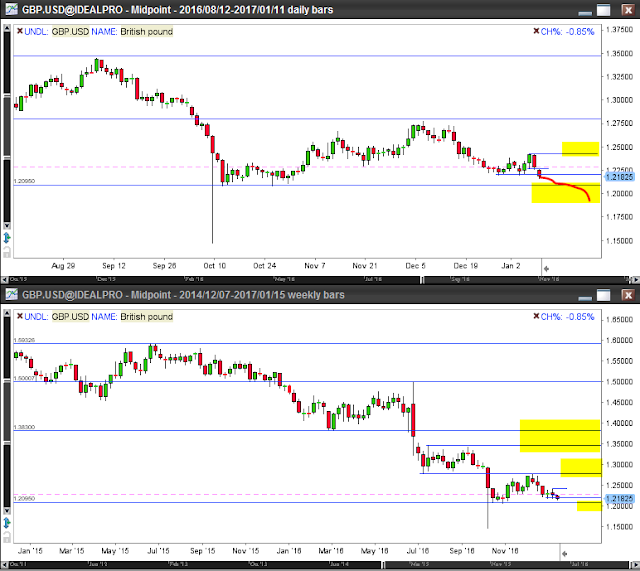 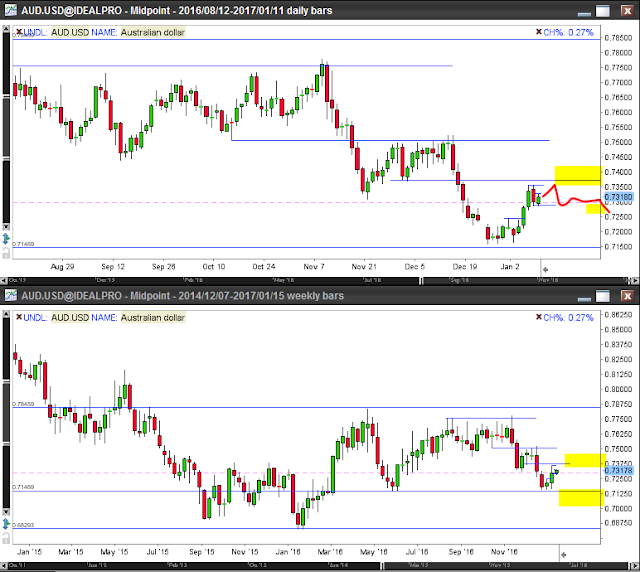 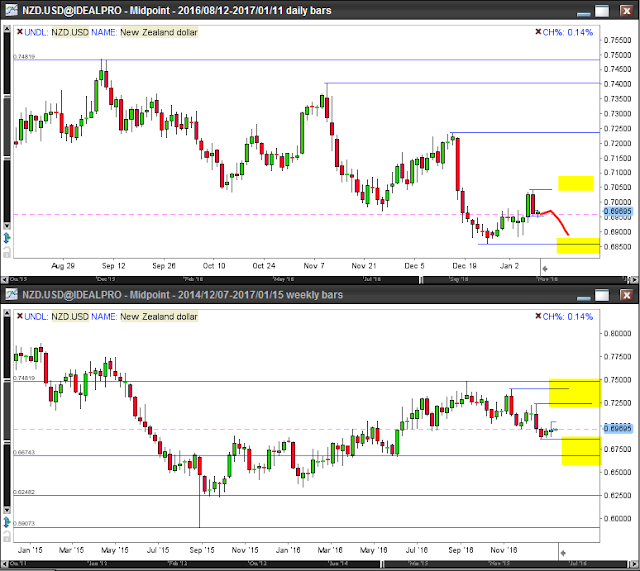 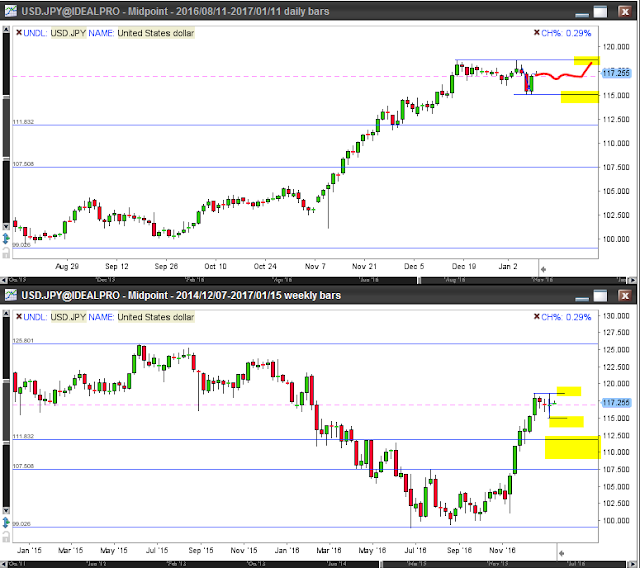 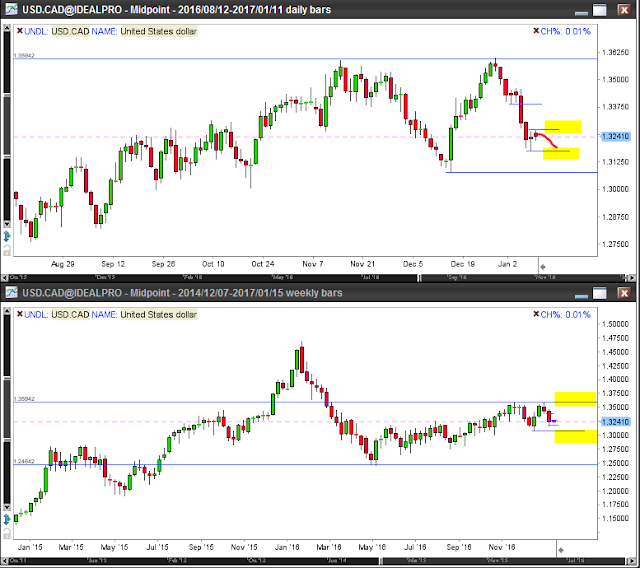 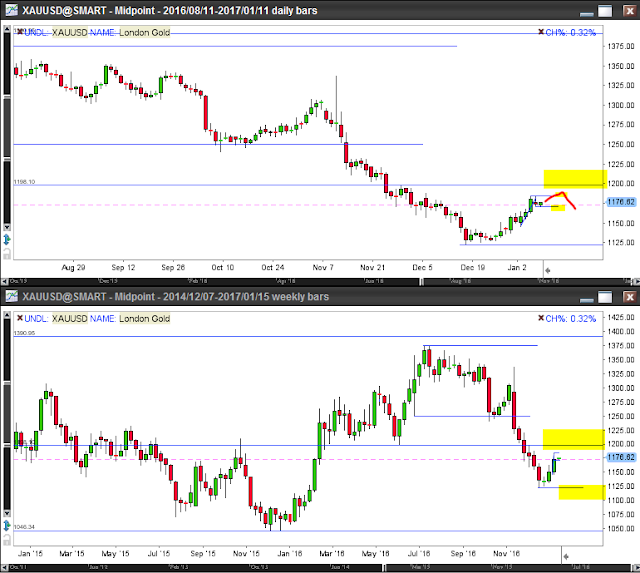