It seems that manufacturing PMI data shows some sign of life in Europe.
In France it makes a four year high:

In Europe as a whole there is also a new high:

How would that translate to inflation is yet to be seen. But it seems that inflation is catching up in the main economies: 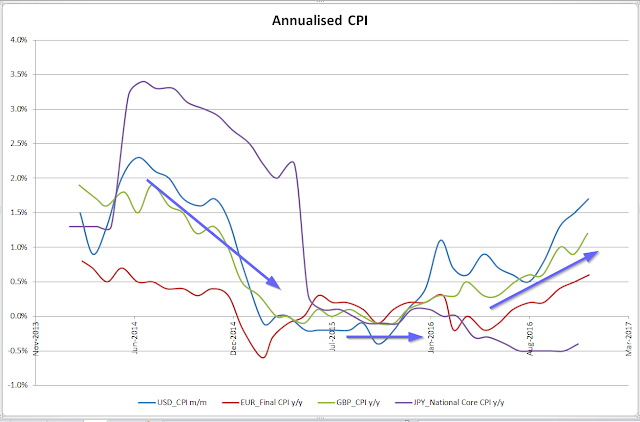 Email ThisBlogThis!Share to TwitterShare to FacebookShare to Pinterest
Labels: Economy

Equities rally, EUR is under pressure from both sides of the Atlantic

I had had a bit of break due to other business activities, so now I'm trying to catch up with the markets.

Equities:
SP500 broke out from a 5 months range. The next target is a measured move around 2300.

Nasdaq is still within the range as we saw some asset rotation after the election. DAX made a fierce breakout from a 4 months range after ECB announcing the extention of its QE easing program. The next target is around 11500 that is the 2015 november high and alsa a measured move.

EUR/USD is near to the 2015 low of 1.0500. Both the US election and the ECB decision worked against the common currency. The retest of the 1.0800 could be a good short opportunity.

GBP/USD retested the 1.2750 level it broke before the flash crash. Apart from the flash crash big shadow candle it made a measured move before retracing.Another test of the 1.2750 and perhaps a false breakout could be a short opportunity.

AUD/USD is very noisy on many timeframe and it is difficult to trade. The same applies to NZD/USD.

USD YPJ reached the level it broke in February. It is very overbought now so the outright trade of the break of 116.00 is difficult. The retest of the 112.50 are would be a long opportunity.